This is a delicious bread made today. It's called herb cottage bread and is from Jennie Shapter's book, "Bread Machine; Hot to prepare and bake the perfect loaf." I haven't been using my machine but rather just my Kitchenaid and generally double the ingredients. I always try to put in about 2/3 of the flours and then add enough so it just starts to come away from edges of bowl, then let it knead for 6 minutes. Also, I've been adding things like oatmeal and cooked cereals such as brown rice or barley. For this particular loaf, oatmeal and brown rice were added. The recipe is a pretty basic white bread one with fresh chives, parsley, thyme and tarragon. I didn't have fresh herbs, so used dried--when you substitute dried for fresh, if it calls for 2 Tbl. fresh, use 2 tsp. dried as they're more concentrated. I cut the risen dough in half...half for the cottage bread and half went to the baguettes. For the cottage bread smaller ball is 1/3 of the dough, bigger is 2/3. Form balls and put on a floured baking sheet. I oiled tops then covered with plastic wrap to let rise about 20 minutes. 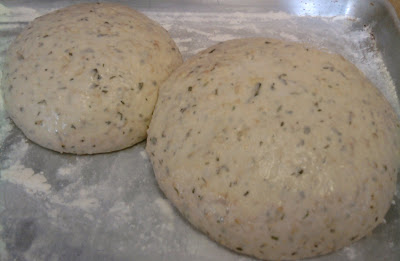 First photo shows bread rising. Second is risen bread with slashes in bottom large loaf with water brushed on. Next thing to do is put smaller ball on top and then gently push handle of wooden spoon down into both of them (this and the slash/water are to help them stay together) 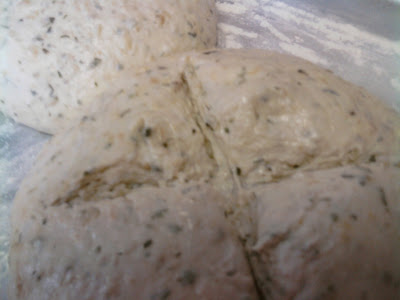 My finished loaf ended up a bit cattywampus!! Let them rise longer than probably should have so they were a bit difficult to work with. Since I worried they might collapse, I did the stacking pretty quickly and without looking! Oven was at 425 and I used speed bake, so baked about 25 minutes instead of 30-35. I use a small thermometer all the time to check on my breads. Chef Brad always uses one and for most bread you want 180 degrees internal, but for French bread type ones you want 210--sort of did an in-between on these. (look him up online or find him on BYUTV channel with his excellent Fusion Grain Cooking) 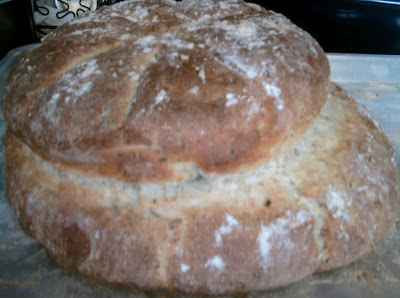 You're supposed to put 8 slashes on top loaf, 12 on bottom, then brush with mix of 1 Tbl. water and 1 tsp. salt and cover again with plastic wrap. Used same plastic wrap and let rise for 10 more minutes, then dust with flour. 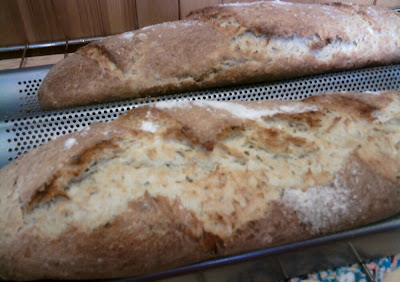 These breads were formed like French bread by rolling dough into rectangle that's about as long as pan (recently bought baguette pan and wow, do I ever wish I'd bought one of these years and years ago!) Roll up long sides to meet in middle and pinch together, flip over and put in pan--it's non-stick but I still spray a bit of Pam on it. They have a super crispy crust and LOVE that. 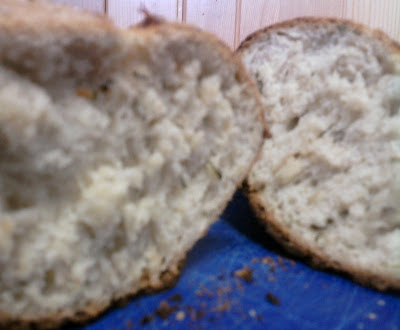 Sorry some pictures are a bit fuzzy--only had phone to take pictures. You can see the texture in open baguette picture. You could also add parmesan cheese to this, or change it up in a lot of ways. Could add raisins, cinnamon, sugar for a sweet one; cheeses and pepperoni for spicy. http://www.amazon.com/Bread-Machine-Prepare-Perfect-Loaf/dp/0681783192/ref=sr_1_4?s=books&ie=UTF8&qid=1328062749&sr=1-4 Amazon has Jennie's book if you're interested. Unbelievably beautiful breads and think there's a picture of every one along with good directions! 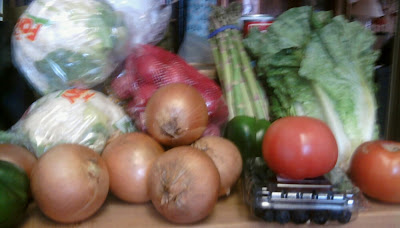 Last two photos are our bounty from Bountiful Baskets last Saturday. You can find out more about them at their website. http://www.bountifulbaskets.org/ Mostly in west and southwest. It costs $16.50 each week. There are extra things offered at many of the sites each week--we got beans and grains last week--30 lbs for $28. Do not have to take part in the co-op each week so works well for the two of us. This week offerings include various breads, apples, carrots. In past have gotten granola that was wonderful, tangelos, tomatoes and some others of the extras. Hubby has volunteered a lot but not so much lately because of a very bruised knee. Often got an extra piece of fruit or vegetable, but not always. Bought some of their delicious bread--a good deal, but decided I wanted to start baking more and have had so much fun trying lots of Jennie's recipes. 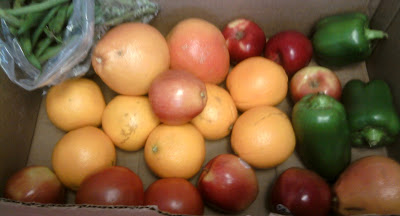 Another good deal for food is Zaycon Foods out of Spokane, Washington. We have gotten chicken breasts (HUGE), sausages, bacon, 93% fat free ground beef, salmon, hot dogs and some other things. https://secure.zayconfoods.com/ Prices are good. Comes in bulk and usually not wrapped for freezer. We use a food sealer and in the case of the chicken breasts, cut them in half down where breast bone would be as each side weighs about a pound. Some we left whole and even a couple times we would put two whole pieces in a bag for when family is here. Some people cook at least some of it before putting in bags. Know this doesn't have to do with the bread although there is a fun bread in the book with two sausages down the middle of the bread so each slice has two pieces of sausage in it!
Posted by Eileen at 5:11 PM