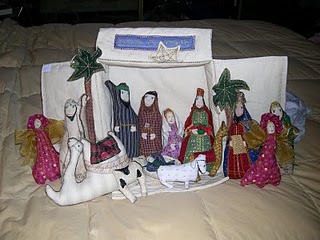 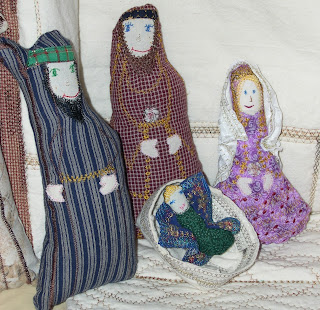 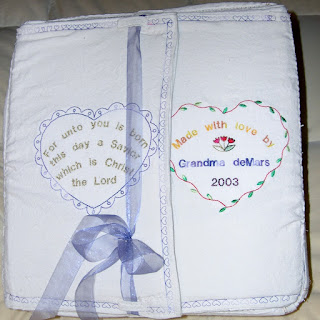 Nativity I made for grandkiddos 9 years ago.  Wanted something they could play with and saw something somewhere online that inspired me.  It's all free form stitching using stitches on my machine except faces that I did with embroidery designs bought for my machine. 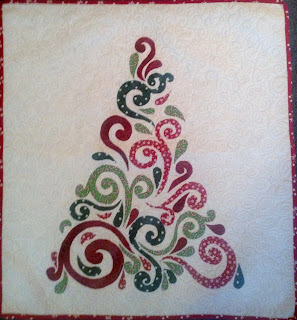 Saw this Swirly Christmas tree wallhanging on Craftsy
http://www.craftsy.com/pattern/quilting/home-decor/swirled-christmas-tree-quilt-pattern/17664 and had to have it.  Made three of them this year using Steam a Seam.  Used swirls in quilting, but they get a bit wonky in the colored areas where I was trying to get all the ends and edges of the prettiness.  In last one also sprinkled in some stars near the top.

The strip wallhanging uses leftovers from my Christmas quilt I've posted about over at The Christmas Quilt Festival  http://www.quilting-tutorials.blogspot.com/p/2012-christmas-quilt-show.html

First saw the ornaments runner at my lqs: The Attic Window.  It's from the book My Runners that was found at Amazon, too.  Made it this year.  FMQ was swirls and stars with Merry Christmas written at either end near tree limbs. 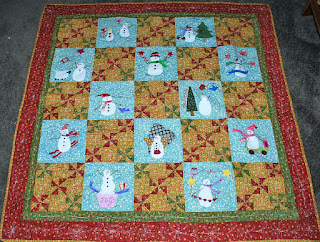 Snowman quilt, made using free designs called Snowbound by Bunny Hill.  I used pinwheel blocks instead of what they suggested.  It's one of the favorite quilts I've ever made and my grandkiddos love it.
Posted by Eileen at 8:09 PM 12 comments: Links to this post

There's a Christmas Quilt Show going on over at Michele Hester's:  http://www.quilting-tutorials.blogspot.com/p/2012-christmas-quilt-show.html
.  Have wanted to join this for a couple years but never remember to get it done.  This year I saw an email about it, so decided to add my quilt from a year or so ago.  I found a book with over 300 block ideas for Christmas and made a lot of blocks from those pictures and directions; also made some extras found online or made up such as the candy cane one.

Enjoy the festival.  And have a wonderful Christmas season.
Posted by Eileen at 7:44 PM 36 comments: Links to this post

Saw a strata quilt somewhere in last year or so.  It was made similarly to this one with colored strips about 2 1/2 inches wide and about 40 inches long, same size for white muslin strips.  Really wanted to make one for  grandniece Sabra and her hubby, Ben who got married last November.  It's taken me awhile to finish as I was making the Interlocking Seasons and working on several other things.

Inspirational one was a rainbow quilt and it used printed cottons.  This one uses sets of batiks in blues, pink/oranges, greens and blue/purples.  There are 28 strips.  Used all materials I had on hand except for a couple orange scraps my dear friend Shirley gave  me from gorgeous quilts she's made.

To make each strip, I sewed a batik piece to muslin piece to form a continuous loop, then randomly cut the white pieces so there'd be one on either end of colored ones.  In one instance the colored goes clear to edge, otherwise they varied.  Love randomness of it.
Below shows part of backing.  It includes a bunch of good wishes to the couple.  I cut small pieces of freezer paper and ironed to back of muslin, put them in a basket with various colors of washable-ink pens and instructions,  this was passed around at a shower and also at their reception.  After getting them back, they were ironed to set ink and sewn together into strips to be inserted in backing.

This is part of the backing showing some of the good wishes pieces. 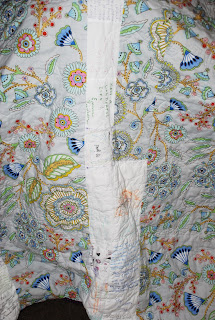 In midst of making this and trying to quilt a baby quilt, my Brother Duetta decided to throw a fit--it literally started screeching and then totally refused to work!  Hadn't been in for a "spa treatment" for a long time. But the shop from which I got it and where it usually goes is 88 miles away and over two mountain passes with lots of snow on them.  I spent a couple hours fishing out a LOT of lint and then oiling it--supposed to let repairman do that, but needed it to work now!  After awhile fly wheel would move a bit and then little by little it started working again.  After I got the baby quilt done, and two strips of this quilted, the Duetta decided to break stitches every inch or two---SOOOO fun--HA!  Decided to give my 1976 Pfaff a try.  It was ridiculously slow and with my wonderful shoulders, just not going to work since it would take me about four or five times longer per strip to sew.  New sales/repair place in town has both of those machines and hubby got me a "Baby Brother" from Costco for $140 that worked well to finish this since they're backed up two weeks or more.

Have a picture of dear hubby pinning the quilt but he said I couldn't use it!!  He's always so good to measure/cut batting, sandwich quilts and pin them for me.  Ben and Sabra came by today and we gave them their quilt--on their one year anniversary, no less!  They loved it...Sabra spent all the time looking at the quilting so that was fun she enjoyed it!  Forgot to get a picture of them with it, but have the memory of them sitting under it while they were here.
Posted by Eileen at 4:48 PM 1 comment: Links to this post