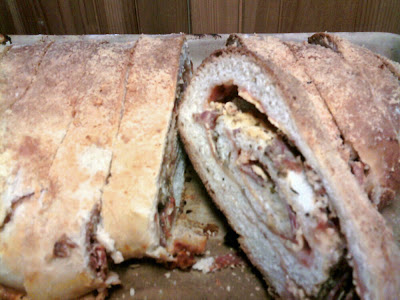 Wishing now I'd taken more pictures of the process but this is it! I saw this post at: http://www.howsweeteats.com/?s=pizza+swirl&archive-dropdown= and decided to try it with a couple variations--ALWAYS variations when I cook! I used Ginny's Dinner Rolls recipe which is below, but for the life of me, I can't figure out how to arrange things on here, so it won't be in a regular recipe format! Instead of just pepperoni, there's chopped pepperoni and salami. As for cheese, I had mozzarella on hand and also added some slices of American cheese. Used just oregano since couldn't find Italian mix in my cupboards--did I say this was all happening in the wee hours of the morning? Finished up at 6 a.m.! I'd use a thicker sauce next time and also would roll dough out quite thin so everything was distributed a bit better, but it's yummy. This could be changed in so many, many ways. Used about 3/4 of dough for this one and then rest for a small cinnamon/craisin roll that is just delicious.

This dough makes the most wonderful rolls--dinner, hamburger, cinnamon, whatever!! Ginny's been a friend since we lived on Fort Irwin Army Post in the middle of the Mojave Desert in mid 80's. We were in a tiny branch of the LDS Church together and our children were wonderful friends. Ginny and I both taught school at Fort Irwin, also.

Ginny's Dinner Rolls: Dissolve 2 Tbl. yeast in 1 1/3 c. water. Add 1/4 c. sugar, 2 tsp. salt, 2 beaten eggs and 1/4 c. oil to this (used my kitchenaid mixer with greased bread hook). Then add in 4 1/2 to 5 c. flour or enough to form a stiff dough. I kneaded it in mixer, but you can turn it onto floured surface. Knead until smooth and satiny. Let rise until double. I put some oil in mixer bowl after taking it off machine and then rolled the dough around in it, covered bowl with plastic wrap and let it rise about an hour. Because it has eggs in it, you can let it rise longer and punch down a couple times if need to extend the time. It says to let rise another time after forming into desired shapes, but I didn't let it rise that much after getting it all together. For just rolls bake 12-15 minutes at 400.

For pizza bread, I spread sauce on generously then put on mozzarella and garlic, then meat and sliced cheese over then oregano. Rolled it up, spread butter over and sprinkled with parmesan, then put it on pampered chef's sided cookie sheet knowing it was going to probably leak (it did). Baked at 350 for about 45 minutes which was a bit much for the smaller one but it's so good!
Posted by Eileen at 5:20 PM No comments: Links to this post 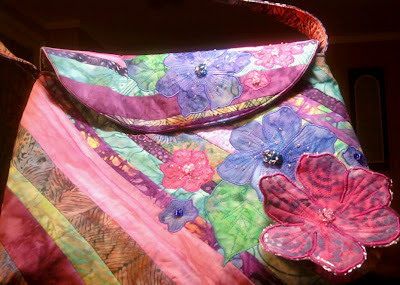 Lining with pockets sewn onto them and swivel catch attached. These are nice, ample pockets. On narrow pen pocket, I put in a pen then sewed across about 1 inch or so up from bottom so pen wouldn't fall clear down. 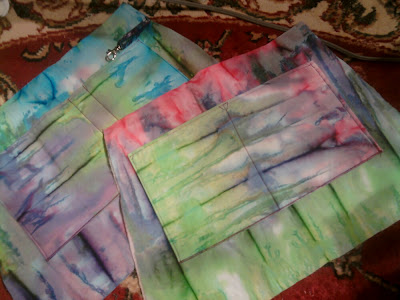 Flap ready to be sewn on. My only real complaint about pattern is nothing telling me where to put magnetic snap and it turned out not really to my liking but, oh, well!! Next time will be different. 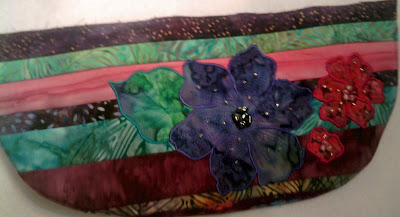 Insides of bag showing iron on fleece and opening for turning. I did leave about 7-8 inches instead of what they said--hard to turn as it was. I couldn't find the exact foundation pellon she said, so used what local quilt shop suggested and doubled it. It gives it a nice heft, so think it worked fine . 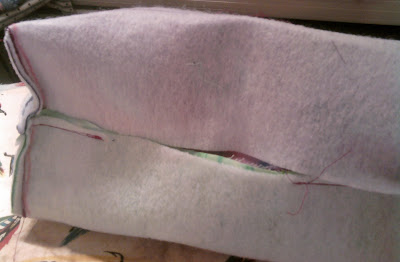 Outsides ready to be sewn. Oh, used my own fabrics, not a jelly roll. 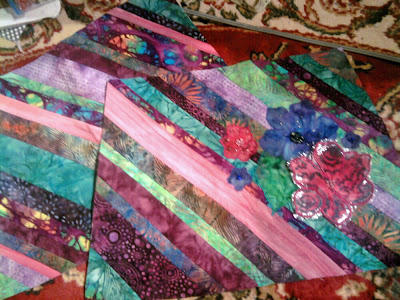 Pattern from Cool Cat Creations and there's a matching little clutch if you want. Love it and enjoyed most of the making of it. It's a big bag so have actually figured out how to decrease the pattern to 75% which I think is a better size. I'll be making bags that size for dd and dgd soon. They've helped the process by figuring out their own colors, preparing strips and tracing flowers onto fusible web. Making strips and sewing them were most tedious part and maneuvering big heavy pieces of foundation pellon wasn't my idea of fun except as new "fabric" emerged. All in all this is definitely something to make again.
Posted by Eileen at 3:29 PM 4 comments: Links to this post