HOW CAN YOU TELL I LOVE A RECIPE?

Just in case you ever want to know which are my favorite recipes in one of my many, many cookbooks...take a look at the page below. It's from a German-American one bought at Stars and Stripes store in Frankfurt, Germany in late 1970's. It's a cool book with German recipes on left pages and English versions on right. All of my cookbooks are right there in the mix (literally, obviously) as they're being used. This particular recipe is one of the most used in all of my books for desserts. It IS absolutely delicious, huge, and doesn't need frosting. (called delikater topfenkuchen in German) Years ago I started making it differently because of not having things like sour cream or lemon juice on hand. I'd also seen o.j. made using the whole thing, rind and all and somehow it clicked to try in this cake. It's fantastic and just made one using a tangelo from the box of them we got through Bountiful Baskets (if you've never heard of them or Zaycon foods...google them and get in on great deals!) 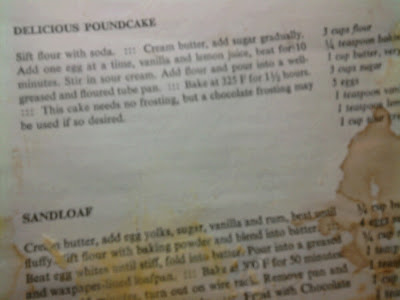 This is what most of the cake was baked into--pretty, eh? Used a silicon rose mold and also part of it was baked in a small spring-form pan. This is a huge cake--first time I made it, the amount of ingredients didn't register and so were doubled thinking of the regular size of poundcakes. I had cake being baked in all sorts of pans and other stuff! It's also a very forgiving cake...one time before figuring out sour cream wasn't necessary, I couldn't find any in the house and was needing to bake two cakes for a big Relief Society (my church's women's group) celebration. Looked in the cupboard and found a packet of sour cream something or other...just as I watched it being beaten into the dough I realized it was chive-flavored sour cream mix for baked potatoes!! I ended up adding a lot more lemon juice in both the cake and the frosting and no one noticed...helped that we'd had a pretty spicy dinner before hand, but... :) 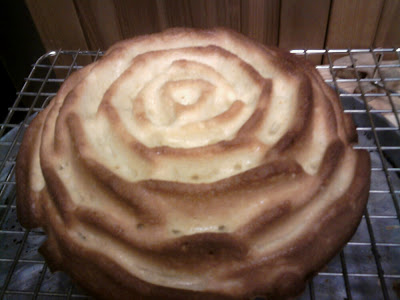 I'm putting the original recipe here but cannot figure out how to fix it so it'll come out looking like a recipe on my blog, so hope you'll be able to make sense of it.
DELICIOUS POUNDCAKE
3 c. flour 1/4 tsp. baking soda 1 c. soft butter 3 c. sugar 5 eggs 1 tsp. vanilla 1 tsp. lemon juice 1 c. sour cream
Sift flour and soda. Cream butter, add sugar gradually. Add one egg at a time, vanilla and juice, beat for 10 minutes. Stir in sour cream. Add flour and pour into well-greased and floured tube pan. Bake at 325 for 1 1/2 hours. Now...here's what I actually do--cut one whole (rind and all) lemon/orange/tangerine/other citrus into quarters and take out seeds if any. Put in Cuisinart (other food processor or blender) along with soft butter and sugar then process until fruit is pulverized (could probably chop the fruit up very finely instead and use a mixer). Then add milk or sour cream if wish and vanilla (I usually add extra vanilla in all my baking). Process well, then add eggs and process until makes a nice dough--this wouldn't like 10 minutes in the Cuisinart, so just use your judgement--a minute or so is more than enough. Pour into prepared pans. I wouldn't use the rose form again for pound cake--makes it too high in middle and therefore cooked about 2 hours and was quite crispy on all the indentations--loved it actually crunchy like that, but probably wouldn't do it again. That form would be find for a regular cake, though...or maybe a meatloaf--funny shape but might be fun to try. Was just thinking other fruit could go in this cake--berries, cherries, whatever...with or without the citrus. Gotta try that next time. Anyway...try this recipe--you won't be disappointed! 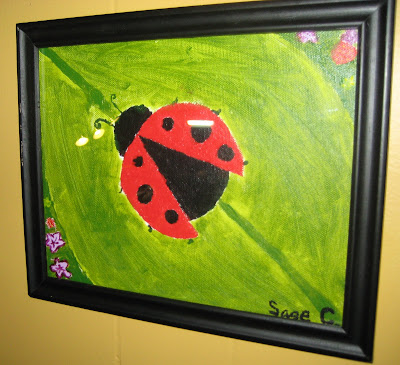 Got so many wonderful handmade Christmas presents. Ladybug painting is by my eldest Girlie Girl, Sagie. Isn't it darling? I also got fingerless gloves from my dil Jenny, recipe card holder from Boyly Boy Adam, handpainted treasure box from Boyly Boy Trey, button clock from Girlie Girls Sydney and Sabrina (their daddy taught them how to sew buttons with ladybug and daisy ones for 12 o-clock!) and dd Diannalynn made me a darling heart mobile that will appear on here later. 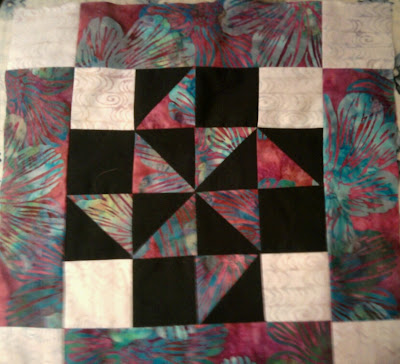 This is the latest Starry Night block I've finished. Last year in January, I started getting the Mystery BOM Starry Night kits from Wish Upon A Quilt. For some reason, I decided to not only make the kit one but another similar one in regular fabrics and two in batik--I KNOW...TOTALLY CRAZY! Anyway...with one thing and another, I got bogged down and am behind. I also didn't realize (DUH!) that twelve 12 inch squares does not a quilt make and needed a finishing kit. Well...I didn't want to buy the finishing kit, am not going to buy the finishing kit--especially since I'm making three extras...so am doing it with material left over from what I've gotten or used so far and will need to buy some extra but not a whole kit's worth. One of my resolutions is to finish things and this is highest priority right now, so have been frantically cuttinng all the cazillion pieces for the 13 "filler" squares for FOUR Starry Night quilts. Keeping it all straight has been interesting. Hopefully by Monday I at least have all original blocks done and can get pictures of all of them. Well...long post, but hopefully you've enjoyed it and will try the cake. Divide it up for a smaller cake or use it as shown.

Thank you for that wonderful recipe.. well, what can i say.. you have a wonderful resolution there.. ;)

Lol, my cookbooks look a lot like yours, but I also write all over mine. I can't stick to a recipe to save my life, I even have to change recipes I've made up myself.

Love the painting, what a wonderfully artistic granddaughter you have!

The cake looks amazing! I have cookbooks like that, too and I just LOVE them! Your painting is terrific - what a treasure!