This is my first quilt quilted on my machine. I've been sewing for 54 years, so most projects don't intimidate me too much, but this did. I practiced on a couple small things and then realized I've done similar things over the years, just not a whole quilt. It isn't a sandwiched quilt--just the front and the flannel back, but it has a nice heft to it that I like. Part of the reason for that is the foot that was recommended by my machine's manual didn't work really well going over anything very thick. Looking further in the manual there were directions using a different foot--one very similar to the one I use when machine embroidering and wow did that make a difference!! Next quilt will have three layers. 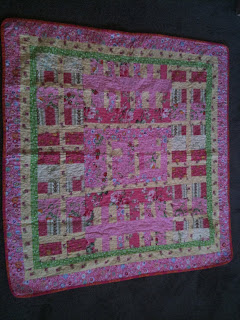 Below are two pictures of the quilting--front and back. Mostly just loops all over the place. Some loops look a lot more like leaves!! Tried making hearts but not good at that at all. Obviously there's a learning curve I've got to tackle!! Also, a lot of the stitching turned out to be longer stitches than wanted, or teensy stitches. Did a lot of stitching on it first that really didn't like at all, so spent several hours picking it out while watching tv--oh, well!! 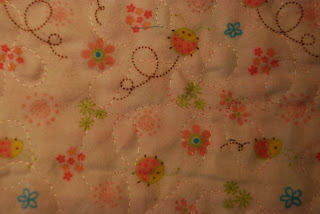 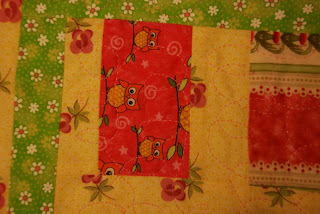 The last picture is my first use of binding clips--aka hair clips which really, really are great to work with. So nice to not get poked a cazillion times while sewing on the binding--except the occasional needle sticking me while sewing. 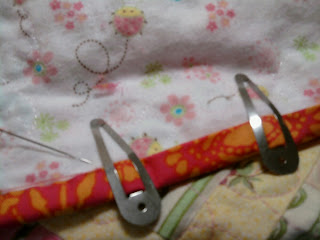 Quilt is on it's way to the sweet baby along with a bag for her momma.
Posted by Eileen at 6:51 PM

That quilt turned out so cute! I love it!

Lovely quilt! Way to go on getting it quilted too. It looks great!

Great little baby quilt! And you did a lovely job quilting it!

It looks really good! I still find that my quilting improves with every quilt I make.

If you go to your blogger settings you can have each comment emailed to you, it is easy to reply to them individually that way. :)

think i set it to do that, but not sure!! i'm SOOO a computer dren (opposite of nerd)

It turned out just beautifully, Mom!!!

I got the beautiful quilt and bag! We love them both! I'm so excited! A million thanks!!! There's a picture of me with it on my blog!