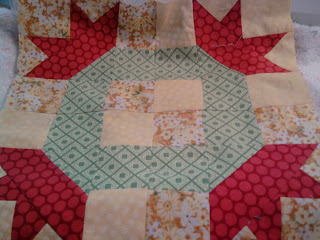 Got a Kate Spain Christmas fabric layer cake that's wonderful and having so much fun making up blocks. Most are from a book already mentioned on here: 301 Country Christmas Quilt Blocks by Cheri Saffiote, printed 2002. All sorts of techniques, but mostly doing pieced ones. I'm also using ideas from other places. Last nite the ones done and in progress counted up to 48! And that's not all I want to do, so obviously they're not all going to fit into one quilt, but I'm intrigued by trying so many different blocks. I've added in some other fabrics--in fact, looking at the poinsettia one I noticed there's not any Kate Spain fabrics in there, but most blocks do have hers in them. The blocks are turning out to be all sorts of sizes, but mostly less than 10 inches. A couple have turned out to be 12" so am thinking they will be a pillow top or a mini quilt or two.

So far my very favorite is one called Poinsettia Wreath. The directions in the book are quite minimal and don't make sense to me on some of them. The book has two or three blocks per page; includes a picture; includes some direcctions; and includes a black and white drawing. This one was just not working at all, so decided to draw the pattern out on printer paper, then trace each section on a separate paper and add seam allowances. I then numbered each section on the pattern in the order they'd be sewn. Am so pleased with it and just love the block. Did it so the background color (yellow) was two different yellows--wouldn't do that again, but it'll be ok. I can see a whole quilt done in this design. The design consists of four small blocks with a flower in each. Think this could be done in several colors and layouts. It looks a lot like tulips to me! 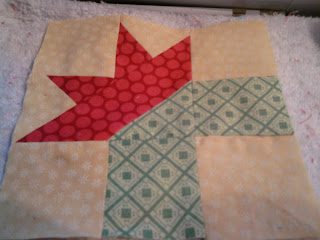 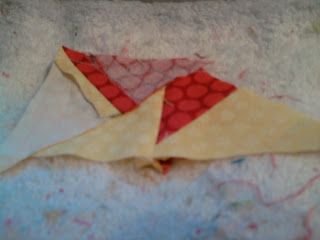 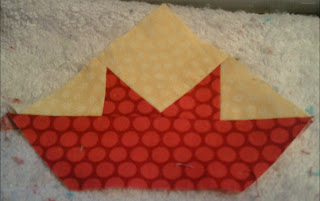 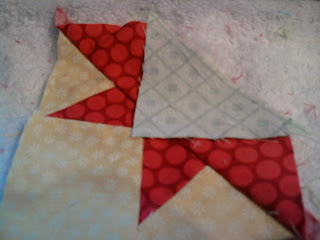 The second picture is what I call the eighth block. It's based on 2 1/4 inch squares--size before sewing. Since it's copyrighted, I don't feel like I can put the pattern on here, but will tell you how I did it, so maybe you can figure it out. You need 16 yellow and 8 green squares. I think you could look at the eighth block and draw that out like I did, figure each section and add 1/4 inch seam allowances. I can't think of what that odd red piece is called--a parrallelogram of some sort? For me the way I figured out to sew it was to sew the small red and yellow triangles together--one is sewn with yellow on top, other with red. EVERY time I sewed them I had to look at the diagram to figure it out! Then I sewed one set to the right side of a yellow square, then sewed the other triangle set to the bottom of the square. This produces a small triangle that then was sewn to the long side of the odd red piece. Then sew the green triangle to the shorter side of the odd red piece. (for part of the sewing, there will be points hanging over at one or both ends) This all forms a square. I sewed a yellow and green square together, and two yellows to a middle green square. These rectangles were then sewn to the red/green/yellow square. Cannot tell you how many times I had to pick things out because I wasn't paying attention!! So...pay attention a whole lot better than I did!! 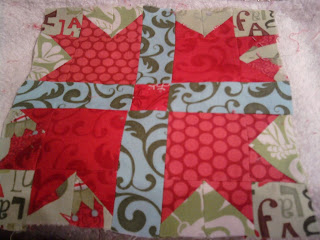 This one is called Christmas Tulips

This one is called North Wind--love how it looks with the fabrics chosen: 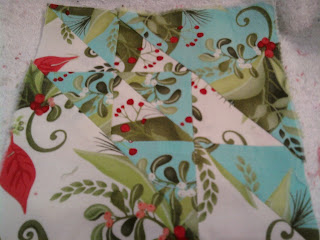 Peppermint Candy is one of my favorites, too: 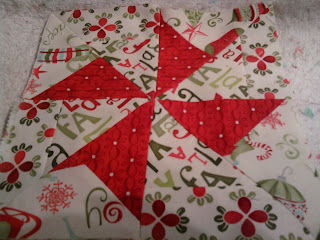 There are lots of patterns for blocks out there--lots of free ones!! Try it to add up to a Christmas or any other holiday or no holiday quilt, so give it a go.
Posted by Eileen at 1:27 PM

Those Christmas blocks look so fun - just like Christmas ought to be! :)