Backs of 9 and front of one of Sylvia's blocks--like ironing seams open most of the time. 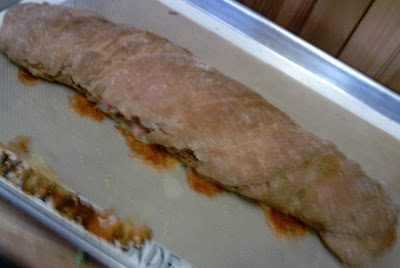 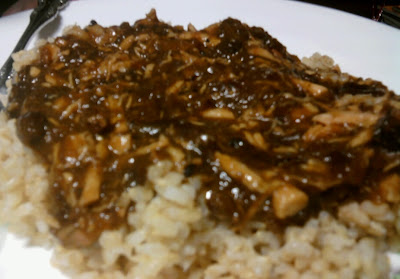 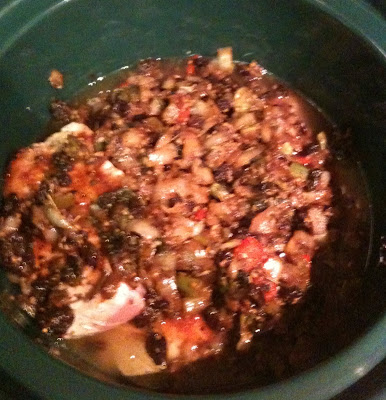 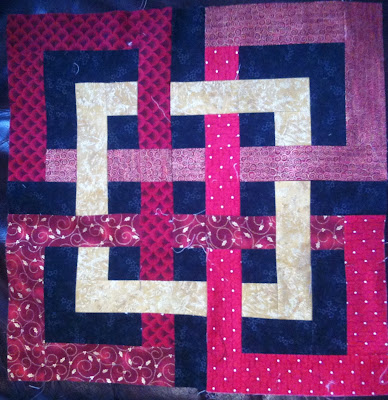 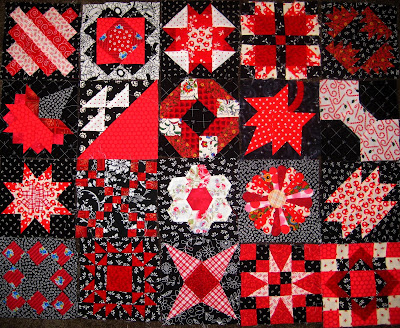 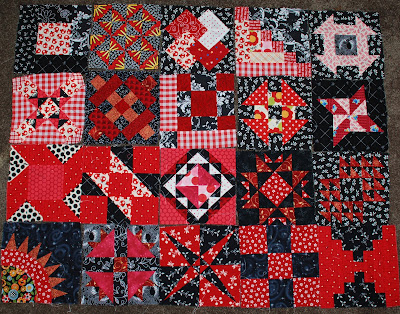 Sylvia blocks in sets of 20. 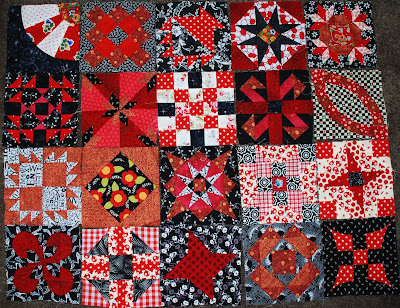 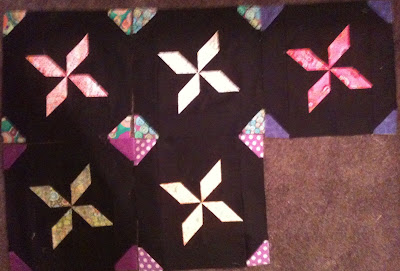 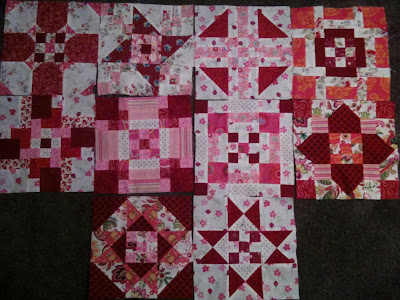 Close To My Heart Blocks.
Looking at my last couple posts, you'd think the subject of this blog has changed. It hasn't and sewing busyness has abounded here...just haven't posted about any of it lately. My main goal for the first of this year has been to get four Starry Night quilts I somehow decided to start last January as part of, and in addition to, a mystery BOM Wish Upon A Quilt offered. The original blocks were black background with mostly Kaffe Fassett materials--couldn't resist being hooked by the name and his fabrics. Additionally, have been wanting to do a mystery quilt. Why in the world the decision was made to make four made sense at the time, but at the time it also escaped me that 12 blocks would not a quilt make!!!! Lo and behold, in late 2011 a kit came with directions that showed directions for the 13 alternate blocks and finishing for the top. Geesh, was I surprised and at that point getting rather sick of making four of everything. So making four of 13 more blocks just about frazzled the sandsnipe as mom used to say! (hmmm...not sure that's exactly what she said but something nonsensical like that)
Anyway...4 sets of alternate blocks (one of original fabrics, another similar from my stash, and two batiks) got cut out and are in production. Original set is all done, about 3/4 done with one batik, other two sets have centers done and are just waiting for all sashing to get done. It's been very overwhelming and boring doing just those, so got the wild idea to not just do a few of my favorites blocks from Sylvia's Bridal Sampler as originally planned, but to do them all in order--I'm plum crazy I know, but since a month ago, I've finished 70 in red/black/white and love them all. It's become addictive--there are some I wonder at the sanity of doing (fool's puzzle in a 6.5 inch size--AM I NUTS???) but most of them are really fun and new to me. I'm having my husband take pictures of them in groups of 20.
Have been cutting out each block or drawing the paper piecing patterns while watching t.v. So far I've jumped ahead on a few--had to do a Dresden block and hexie Grandmother's Flower Garden since had never done them, and for some sanity did a simple 9 patch in between some of the craziness.
Did 13 blocks for Close To My Heart quilt from Fab Shop Hop in February, too.
Am also working on wedding present quilts for my grandniece and her new hubby, along with one for my hubby's nephew and his new bride. The first one is an easy but beautiful strata quilt in batiks of her favorite colors, the second will take me a long time to do--it's called intersecting seasons or something like that. I adapted it to use 2 inch strips and loved the sample block I made up--it's not exactly her colors, so will be a pillow top maybe, but good experience to try it out.
In between all of that, I've been doing Daring Kitchen baking and cooking challenges I described in an earlier post. This month's cooking challenge turned out deliciously, but realized too late I'd failed to completely read all the rules and instead of braising in an oven or on the stove top, I used a crock pot...oh, well! The next challenge I'll be more precise. :] My fruity spicy pork chops in a crockpot were made by searing peppered/salted chops in oil, removed to a plate. Then put into pan a couple cups of chopped onions, some chopped celery and about 1/4 c. chopped hot peppers (all of those were cut weeks ago and frozen, so VERY easy to put this together). Added in some chopped garlic, couple bay leaves, some cumin to cook until translucent, then added soysauce and chicken broth to de-glaze pan and a cup of raisins, about same of dried strawberries. After that cooked well, put chops into crockpot wth a bit more broth and poured sauce over. Let cook about 7 hours on low, served over brown rice. Very spicy and yummy.
Oh, that picture of bread is ham/swiss cheese roll-up bread--so easy to do--just mix up a two-loaf recipe or use bought bread dough. Roll out into a rectangle and sprinkle with diced ham and cheese, or anything else you want to put in there and roll up from both sides then pinch to seal, flip over and bake on parchment, silicon pads on a pan or just put on a greased pan. A joy of this was the cheese that oozed out and made little chips--yummiest part.
So, enjoy the pictures--since I'm so challenged at getting them right where I want them, they'll all just be at the beginning, so you can totally ignore all my ramblings if you want.
Blog-checking lines: The March, 2012 Daring Cooks’ Challenge was hosted by Carol, a/k/a Poisonive – and she challenged us all to learn the art of Braising! Carol focused on Michael Ruhlman’s technique and shared with us some of his expertise from his book “Ruhlman’s Twenty”.
Posted by Eileen at 12:06 AM