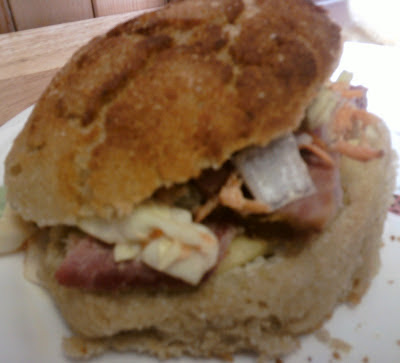 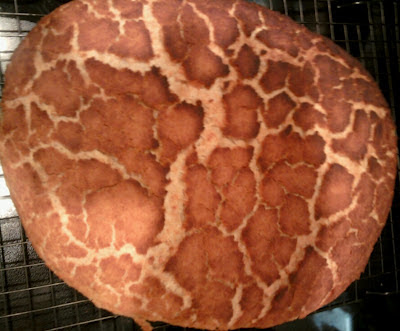 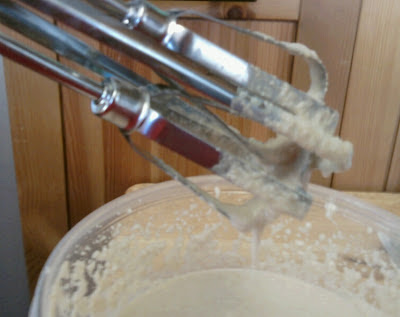 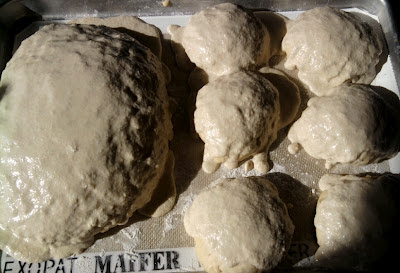 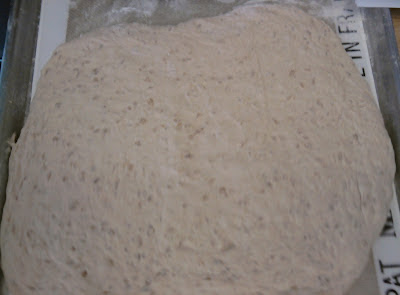 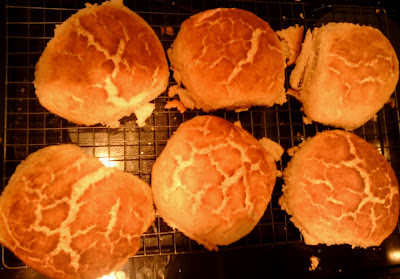 Isn't this great looking bread? It's Dutch Crunch bread or tijgerbrood (Tiger Bread). Some call it dragonette bread and a tiny little girl started a bit of a kerfluffel by insisting it should be called Giraffe Bread. Basically, it's the topping that makes the design, so could probably us
any bread. The Daring Baker's challenge for March gave two recipes as a starting point. One was a soft roll and one was brown rice bread which I opted for, but didn't shape them in pans. For one thing, haven't seen my bread pans since we remodeled the kitchen four years ago! For the other, just love using my baguette pan and also decided to just shape a round loaf and
make a few rolls.
Would definitely do things a bit differently next time. Although, as badly as my wrists were feeling for hours after making topping, not sure I'll make this again! It requires a LOT of
whisking! Couldn't find my electric hand mixer and the bowl of my Kitchenaid was full of rising bread, so finally used an old-fashioned eggbeater. Even then, it took a lot of beating to get to right consistency. Mashing potatoes for St. Patrick's dinner with a masher didn't help, either.

I cannot figure out how to get the pictures where I want them, so they're all mixed up! Made the round loaf and rolls and two baguettes. The picture under the round loaf shows it and rolls with the "goop" all over the top. Next two pictures show how I form baguettes...flatten dough with rolling pin, then roll in both sides, pinch those together and flip over onto baguette pan (do not know why waited so long to buy one of these--absolutely LOVE the bread made in it). Picture with eggbeater shows how the topping looks when it's ready to spread. Directions said it should be like stiff royal icing dripping. It took a whole lot of mixing! Spread it with a spoon over risen bread. It's a fun bread and go to the Daring Kitchen to see all the variations people did!!
Blog-checking lines: Sara and Erica of Baking JDs were our March 2012 Daring Baker hostesses! Sara & Erica challenged us to make Dutch Crunch bread, a delicious sandwich bread with a unique, crunchy topping. Sara and Erica also challenged us to create a one of a kind sandwich with our bread!
Posted by Eileen at 9:16 PM

Great results! It's funny how kitchen equipment seems to go missing, right? I lost the bottom of a springform pan over a year ago, and I can't for the life of me figure out where it went... In any case, thanks for joining us this month!!

Gorgeous bread! Maybe it was worth all that effort. You had a great crackle on the top with a beautiful golden brown color. As a Bay Area native who loves Dutch Crunch, you've certainly done this month's challenge justice. :)