Boeuf Bourguignon was the Daring Cooks challenge for May, and it was actually quite fun.  Something I'd never thought to try as it just seemed too intimidating.  It was a fair amount of work, but the results were enjoyed by all.  It really is a delicious dish.  I suppose what I made is, in fact, a misnomer, as instead of Bourgogne (Burgundy) I used grape juice.  We don't use alcohol, so that was a change.  Not the only one--used sliced bacon, and hubby (who does all my shopping) could not find small onions, so I suggested canned small onions.  Not until they'd cooked in the dish did I read the label--they were pickled--definitely a bizarre taste, so we removed them from everyone's plates!  One of these days, I'll figure out how to make something entirely by the recipe, but it's definitely not in my dna!!!!!!!!!   :) 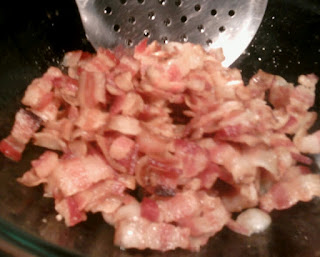 Beautiful bacon from Zaycon foods--extra to use for something later. 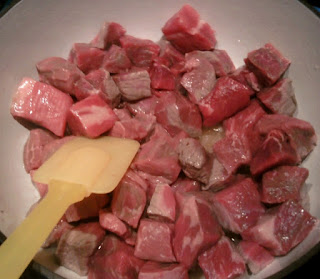 Next time I'd not put all the meat in at once--didn't give it a chance to brown up as well as it could have.  Didn't think about it until it was all in there! 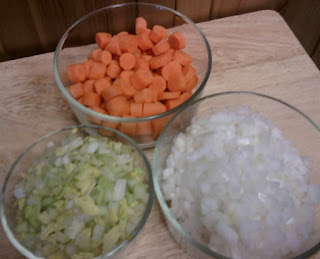 Beautiful mirepoix!  How I love this combo for almost everything. 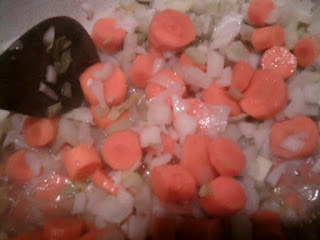 Mirepoix sauteing.  Can almost smell it's deliciousness while typing. 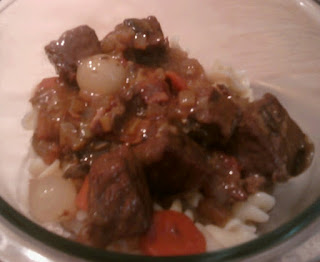 Anyway, it was a dish that was greatly appreciated and one (a few weeks removed from all that work) that I'd consider making again.  Because I just can't seem to figure out how to put a recipe on here without it spacing out--literally, I'll just say to look it up online--Julia Child's is classic, of course.  As you can see, it was served over rice--and quickly disappeared with hubby, me and our daughter's sweet family all here.  May try this when my son and dil are here later in the year--am sure she's tried it in the original form and would like her opinion of it with juice.


Blog-checking lines: Our May 2012 Daring Cooks’ hostess was Fabi of fabsfood. Fabi challenged us to make Boeuf Bourguignon, a classic French stew originating from the Burgundy region of France.
Posted by Eileen at 6:34 PM