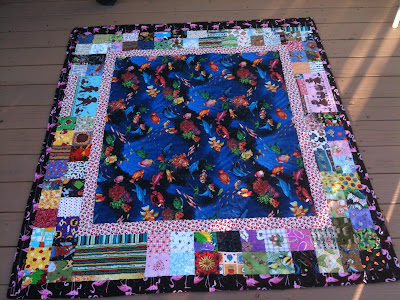 Back of Adam's I-SPY quilt. 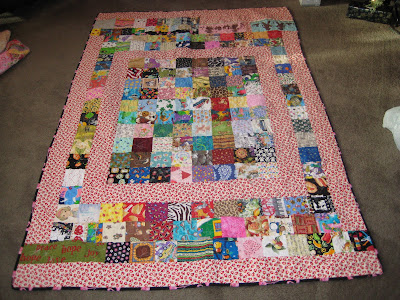 Front of DL's family I-SPY quilt. It's similar layout to Adam's family and has many of the same squares, same ladybug framing, same 3-D fish panel on back and same flamingo binding. I have several squares left or pieces of stash fabric and a panel of 3-D piece, so will make one to have here for kiddos to play on. 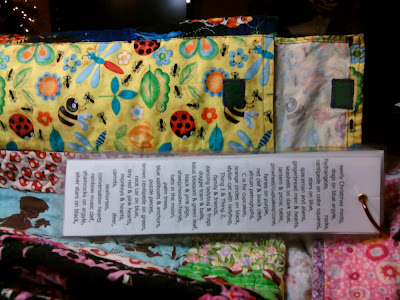 Pockets were sewn to backs to hold laminated list of the squares and and 3-D glasses that came with the material. Hubby bought this at LQS and neither of us realized it was 3-D until our neighbor pointed it out, so he had to go back and get the glasses. Kiddos and their parents loved it on the back! This is Adam's back before pocket and label were sewn on. I quilted it first then added those. Again, these were inspired by http://flourishingpalms.blogspot.com/2011/11/fun-with-dick-and-jane.html 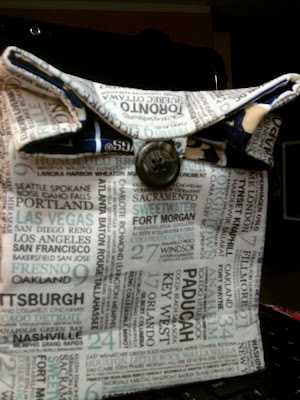 Speaking of I-Spy...this is one of several paper sack lunch bags made for other small presents to go into, and is made from Sweetwater's Hometown fabric. It's such cool fabric and list my hometown of Spokane, a nearby town and lots of places I've either lived or visited. Over 1000 hometowns apparently. It's lined with University of Washington fabric and was my son's. Can't remember where I got the pattern. (somehow this area wants to be underlined!!) The quilts were happily, very happily received.
Posted by Eileen at 1:14 AM

Great I SPY quilt! Mine got finished just in time to give Ella for Christmas. But I failed to get a picture of her with it as she was having a meltdown...too much stimulation that day. Hopefully her mom takes a picture and sends it to me soon! They did not even comment or thank me for it..but I guess that is the way of stepchildren. Oh well....
Have a blessed New Year!

Those are just stunning! What talent! The newspaper bags are incredible, too! Happy New Year!

Love the i-spy quilt and the lunch sack looks great in the Sweetwater fabric!!! Visiting from the Fresh sewing day @ Lilys Quilts:)