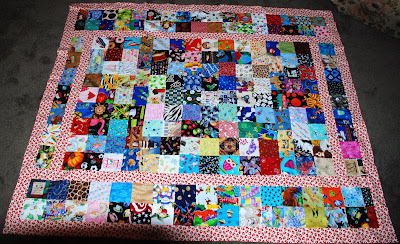 Have been putting off sewing this together for quite some time. Recently saw this quilt: http://www.flourishingpalms.blogspot.com/ at Flourishing Palm. Had seen many versions of an I-Spy from just sewing blocks together with plain binding to having each block separated with sashing (NOT happening here!!!) and all sorts of things in between. When I saw Linda's, it seemed like a perfect design for me--not so fussy and allowing for a lot of blocks. Mine is still a bit different than hers and love how she put lighter blocks in the middle--mine was just grab something from the pile that was a bit different than the one before it!
Originally I gathered about 200 blocks, but not sure at this point how many there are. Can't remember who sponsored it, but someone had a bunch of I-spy block swaps and I got in on one--with the result of some really cool blocks. Plus my dear friend Shirley, gave me a lot of blocks left over from a quilt she'd done awhile ago. Hers were a different size, but serendipitedly it worked out well with 7 of hers equalling the length of 9 of mine!
The back will have some more blocks that didn't make it on front. I also have some really fun material to put on back with those. And I'm making a list of all blocks that will be laminated and put in a pocket on the back so my girlie girls and boyly boys can search for things when they're playing on it. And, of course, it'll be nice and warm to snuggle under.
Posted by Eileen at 7:30 PM

I like the way your "I Spy" quilt came out. I also joined the "I Spy" swap but haven't decided how to sew up my quilt yet. I like your idea.

What a cool quilt! I love I spy quilts and scrappy quilts and that one looks like it has some super-fun patterns in the fabrics.

It's fun to see how you interpreted the quilt you saw on my blog. And mine in an interpretation of one I saw on someone else's blog! It just makes me smile to know how we share with one another in this cyberworld called the blogosphere.

Sounds like you're keeping your quilt at your house, right? Your grandies will love it. Well done!

I REALLY like your I-spy version. It is, honestly, one of the best ones I've seen! I neeeed to get my I-spy stash into a real quilt instead of just a stack of squares.

Thanks for your inspiriation!