These are the first two blocks for a supernova quilt I'm making. Here's a site with a tutorial and a hot link to a bunch of photos on flickr: http://freshlypieced.blogspot.com/p/supernova-quilt-along.html I spent a lot of time cutting out every block in advance then put them in labeled baggies as she suggested. Her directions are wonderful, but I'm working in black and white and it was just not making a lot of sense to me how to sew what I call half square rectangles. The first two were sewn AND CUT incorrectly. So...to make a lot of work for myself but save my sanity, I made small mock-ups of every square. Crazy, crazy, crazy, but it made sense to me and now when sewing they help me orient everything ok. Here's a few of the baby quilt blocks--gotta think of something to use them for! Maybe laminate them and let grandkiddos play with them for matching games. 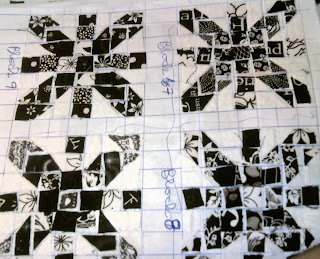 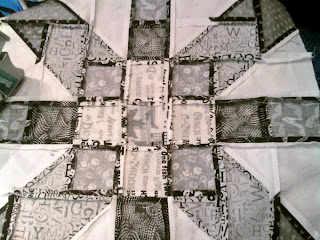 This is the back showing the ironed-open seams she suggested and think works well for these blocks. Each block is 45 pieces and takes awhile to sew and press. They were done in an assembly line way. She suggested laying out your strips in gradations for each block and I did that for the first two, then just started putting things together in ways that seemed fine to me. There will be 25 blocks and I decided each one would have a different center and the two outside "point" fabrics would be different for each block. On fabric.com I found a LOT of fabrics I thought I could use. And ordered a bunch :) !!! Several came and are wonderful prints but the fabric is more like canvas so will be used for something else. Two I thought were cute had ants on them but when they came they made my skin crawl to think about sleeping under those very real looking ants, so they'll be made into something for picnics!! Food and ants...now there's a concept!
Posted by Eileen at 6:33 PM

Wow, even your back looks neat and straight! I'm impressed. These are going to be great!

Gosh Eileen! This just amazes me!! I really love this!! I was at my son's preschool today.. and they are auctioning off a quilt made by one of the Mom's... and it was very nice... but I thought to myself.. "I know someone that makes them a teeny tiny bit better." :-) Very very nice!!
Oh.. and thanks for mentioning my name on that awesome Goodie giveaway over at Chick n' Scrap. She is a fun gal and always makes very cute things.

your first blocks look great. And I can only agree on the ants issue ;-)) I would not like to have real-looking ants in my bed, too !!

Wow! Now I am beginning to know where your son gets some of his "planning in perfection." Again, just amazed at your projects!!