Have been having fun making potholders this last week. Below right are four of the little darlings. Other pictures show the backs and details. I used Sew4Home's Retro Fun pattern. 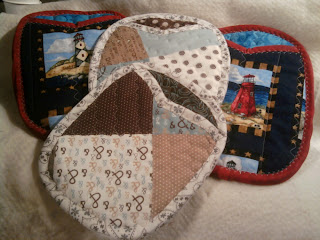 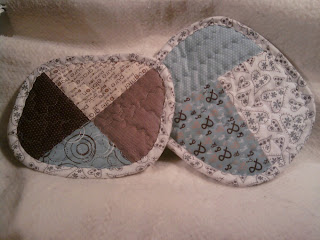 The lighthouse ones are longer because someone said their hand didn't fit down inside well enough...that person shall remain anonymous because I'm hoping they don't read this post, but of course, if they do read this, they will hopefully act all surprised when they open the present at Christmas!!!!!!!!
I just cut the pattern pieces in half across, added a piece of paper about 2" long to each one and voila! These are very easy to make. I do usually try to take process pictures but didn't this time. The Pure is Moda fabric and mostly from 3 charm packs that just got sewn together. I'm making other projects from those, too. Not usually my colors, but love it. I got yardage of a few fabrics in this line I really liked, including the heart one that's for the bias binding. First time ever making continuous binding and love making it...need to find more projects that use bias!! I am a bit intimidated by one of the other projects using this cute material as it has corners and the bias needs to be mitered--something never attempted by me before, so should be interesting. I used decorative stitches to secure the bias as they cover a multitude of sins that a straight stitch just isn't going to. Besides, I have fun using different ones all the time. 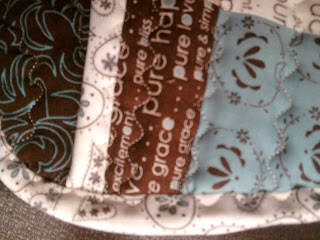 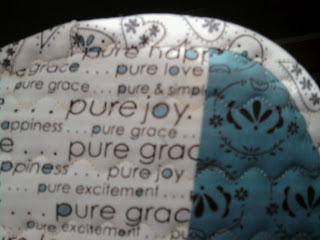 I quilted the fabrics using Insul-brite for the side that is toward the heat, and cotton batting for the pocket part. The Insul-brite says to put the shiny side facing where the heat is coming from but both sides seem shiny to me!! It seemed one side was a bit more shiny so tried to remember to put that part out. I did figure out it pays to read the directions (duh!!) . The first three mitts I cut out the material, then quilted and those are a bit smaller than the ones where I quilted first.
The lighthouse and wave fabrics are from a darling quilt shop in Westport, Washington...can't think of the name but it's the only one in that little town and right on the way to the docks. Hubby and I spent a lovely week there for our 40th anniversary and he thought I needed three yards of both so, who am I to argue with that? He also surprised me by buying some really cool 5 inch batiks of lighthouses that I found when opening the sack...isn't that just sweet, sweet, sweet?
He drove up from CA when we were dating and arrived a day early to find me in the midst of a major crayon batik experiment, so I've always told him that was a super hint of the future and present day projects strewn around the house shouldn't surprise him at all!!
Posted by Eileen at 5:39 AM

These are really cool - pardon the pun. What a great and useful Christmas or anytime present. Great work.

The pure fabric is so pretty. Someone made a quilt for our charity project using a pure jelly roll.

Your potholders look great! Is the pattern online?

Oh those are SO cute! Very nice job!!

Love it! I look forward to acting surprised when we open at Christmas! Haha! The fabric looks familiar :)