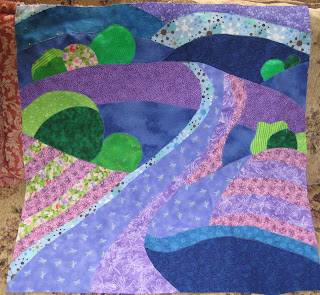 Saw a string quilt block on Vicki's sewinspired site and wanted to share a landscape quilt that's in process. After this picture, some extras have been added--textured yarns sewn over seams . The whole thing will eventually have every seam covered in yarn and/or decorative stitches, some beading and metallic stitching. This is from Dream Landscapes by Rose Hughes and I did a smaller one that's in rusts and golds for DL. Not string quilts as there are patterns but they are reminiscent of them. 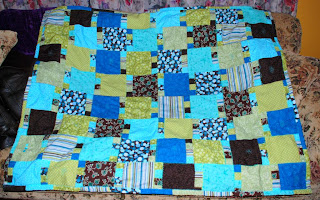 The tourquoise/brown/lime quilt is what I call a comfy quilt. It's one I made for dil, Jenny mostly from materials she chose. Not colors I would have picked, but DL liked them, too, so I made her one and one for little Spencer, and now I like the colors a lot. It's in a fiesta pattern and I've made or am in process of making about a dozen similar ones in various colors for mostly family and some friends. Most of the others have squares with machine embroidery on them or appliqued onto them, they also all have strips separating each row and all of them are backed with fleece. Most also have decorative stitches down every seam and to "quilt" them, I used simple one color embroidery designs in several squares. 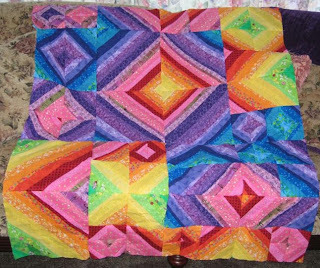 This one is from Stratavarious and is an adaptation of one of their quilts. In theirs you just keep adding strings of various widths in the order given to each other in order until you've gotten to the width you want, then cut out the squares. This one is in a rainbow color palate for a wall quilt--absolutely marvelous. It's just beautiful, but I finished the top just before finding out dear little Sabrina has no color vision. That threw me for a loop as I'd been so anxious to share it with my grandkiddos and I grieve that she sees only in shades of gray. Of course, for Sabrina, that's all she's ever seen, so it's her "normal."
I'm also working on a spider web quilt for a friend. It's also a string quilt but done on triangular pieces of black with bright colorful strips added one over another similarly to foundation piecing.
About 20 years ago, I made a sort of strip quilt for Adam on big black squares. I cut rather wide strips of very bright solids that matched the material for his curtains--a black batik sort of pattern. Not sure if they were bias but was able to curve them some as they were sewn down. I don't think there's a picture of it, but it turned out really well, used bright solids to sash it, and it had black prairie points all around. It was quilted by hand--vividly remember my fingers curling up on their own occasionally!! Don't expect to ever hand quilt another one. Hopefully, I'll find a picture of it somewhere.
Posted by Eileen at 3:24 PM

I love the rainbow one, they are all gorgeous!

Wow! You have been busy!!! Cute picture of the girlies!