NOW I KNOW MY ABC'S...AREN'T YOU VERY PROUD OF ME? 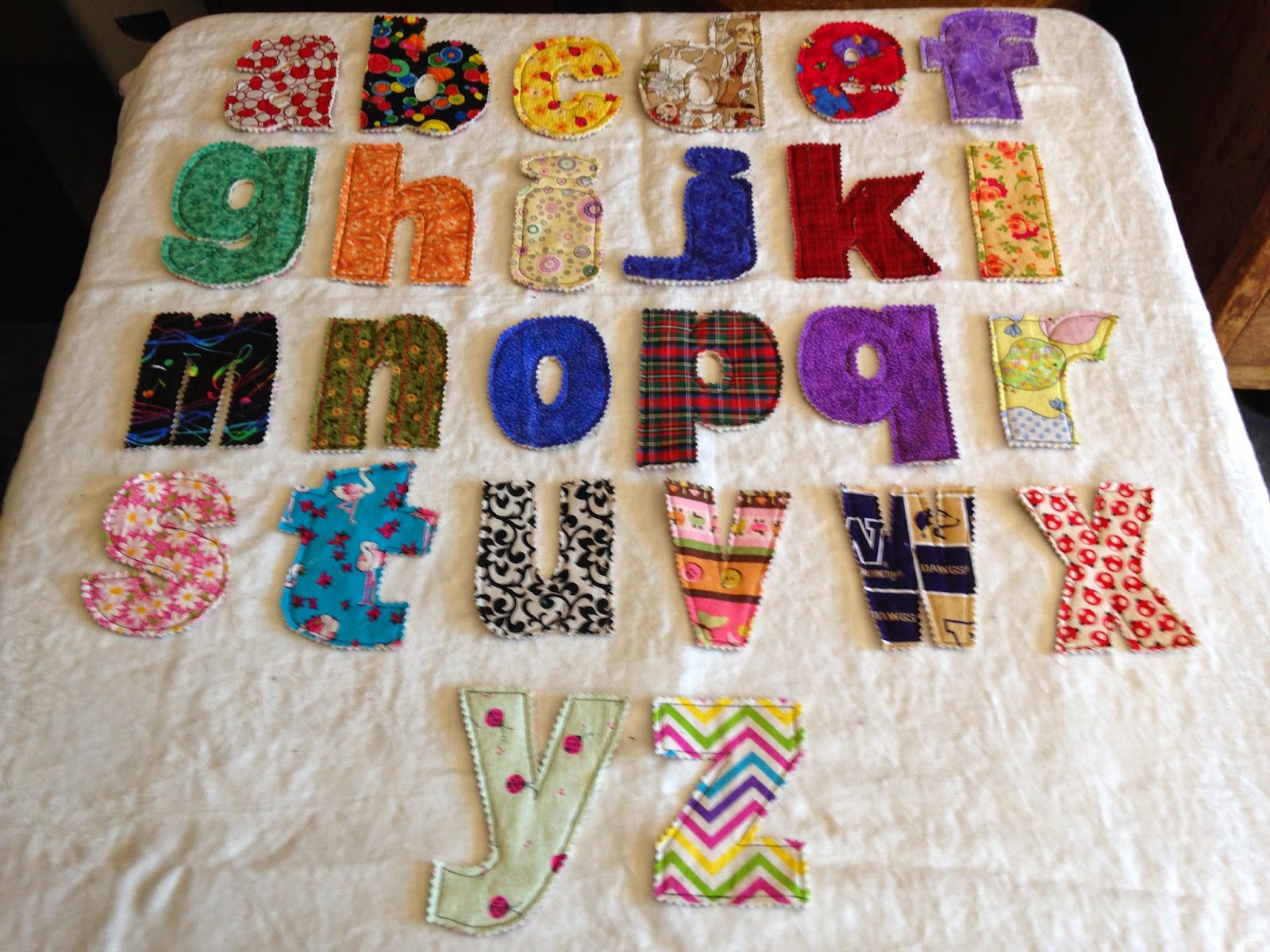 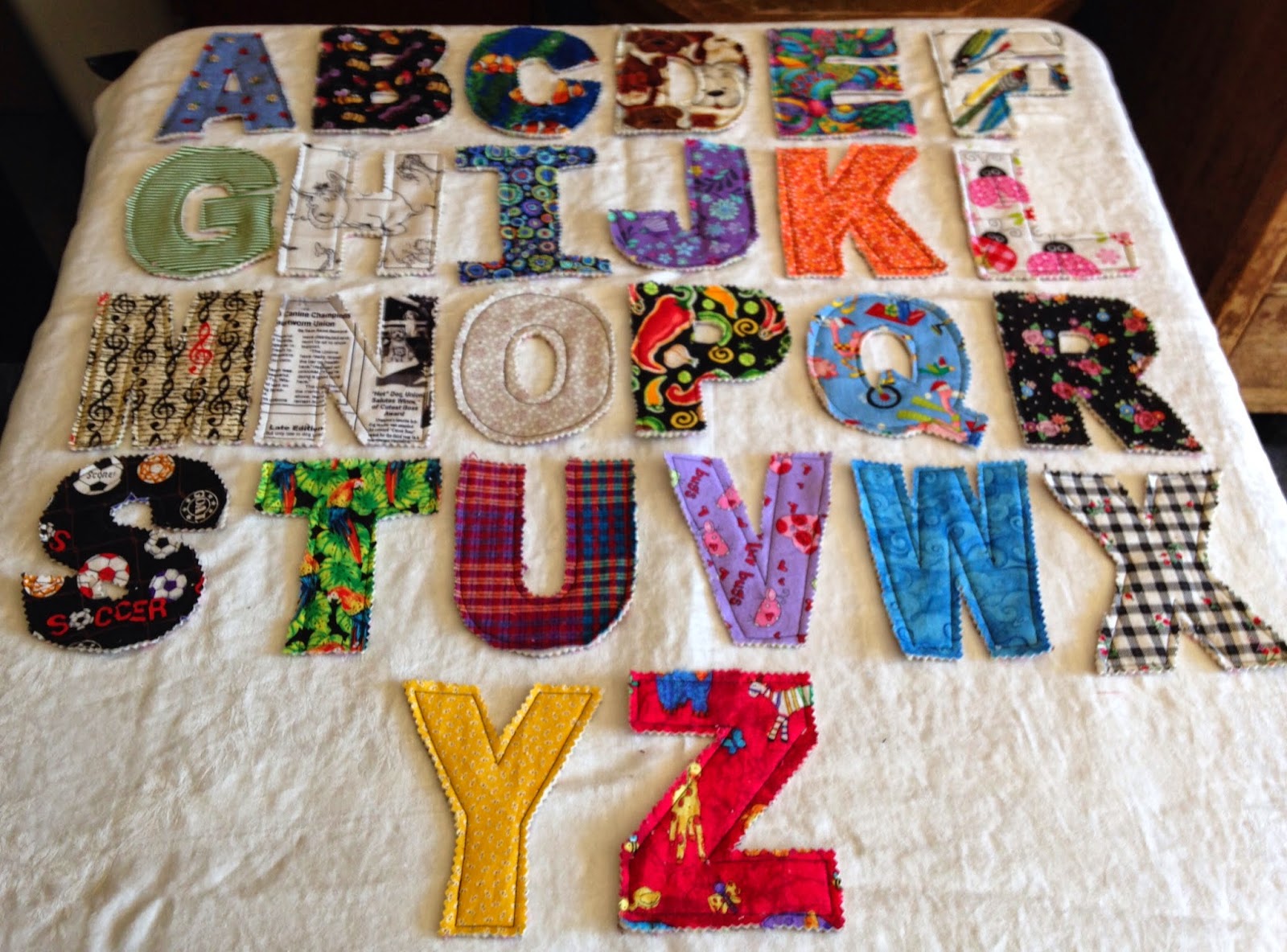 Jessica Fediw at her blogsite (see below), has generously provided pdfs and lots of letters in the tutorial she made for fabric letters and numbers.  I used her patterns to make two sets of them.  One for my cutie pie littlest girlie girl's birthday, and another one to keep here for when all the grandkiddos come to visit.  I tried to match designs in the fabrics to the letters...see the soccer S, peppers in the P, and music designs in the M.  Except for a couple exceptions, all the fabrics in both capitals and lowercase are different.  Also, tried to mix it up with a lot of colors.

One thing discovered while sewing is that I could go pretty fast on straight lines, but had to slow down on curved ones--almost to the end of the second set, I realized using my totally open toe clear foot worked best for seeing where I was going.   Part of this is having very old eyes!!  Part of it is my perfect ability to space when I'm doing repetitive things, too!!  I also have a bright light that shines onto the foot and helps a lot.

I also discovered that using a finger to hold the fabric in place as a pivot point worked pretty well on the larger circles, but the tiny curved places such as the opening in the p's, b's, d', etc. meant a lot of time starting, lifting foot and then starting to sew again.

I put flannel on the backs of all of the letters so they can be used on a flannel board.  It worked best for me (since I can only sit at the machine for about an hour at a time) to pin the fabric/batting/flannel "sandwiches" in my comfy chair.  I tried to make sure the placement of the patterns would allow for the desired designs to show when cut.  Used pinking shears on almost all edges except where it was too small to get into.  You want sharp shears for cutting through all of it.  I had also pieced some of my batting and that was definitely interesting trying to cut.  My thumb has a small blister on it right now.  What we do for our craft, eh??? 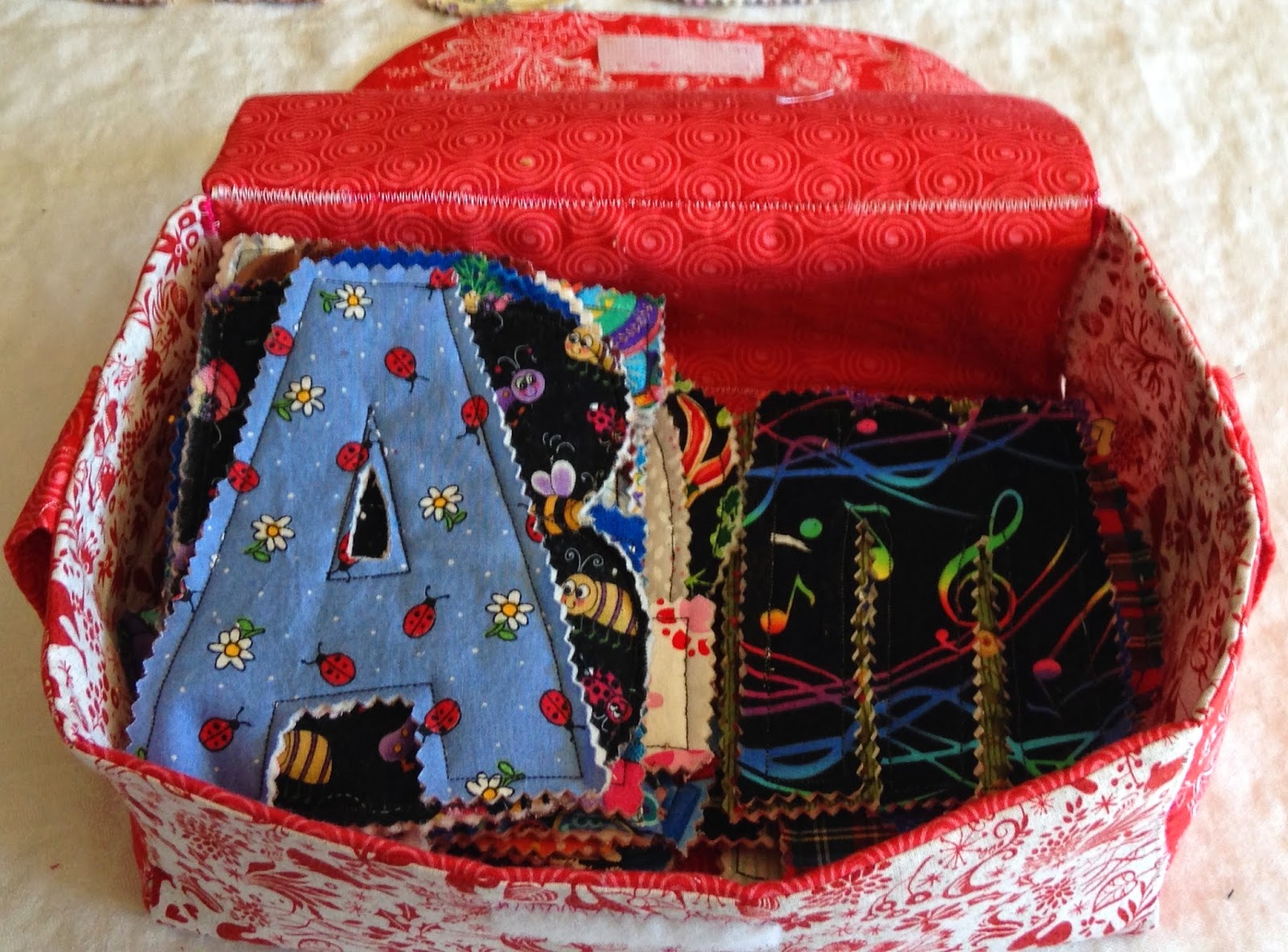 The box to hold girlie girl's letters that will include a laminated card with pictures of the letters in alphabetical order.  Except for the very bottom of each corner, it's all sewn on the machine.  I've made boxes out of cardstock for years and years, so came up with this one by measuring the height of the letters and the width of both stacks, plus about 1/2 inch all around.  I made a paper pattern, but when cutting what I think is called peltex (a heavy-duty pellon) and the fabrics I just cut individual top and bottom, sides, front and back and flap for the velcro, first out of the peltex the exact sizes I needed, then the fabrics about 1/2 inch extra all around.  Used a pencil to trace around the peltex on the inside of one of each fabric, then sewed all around and left an opening to turn.  I trimmed corners a bit on each peltex piece and mostly they just slid right in pretty easily.  Then I pinned the openings and sewed close to the edge.  The handle is long enough she can carry it and also so it can fold back and let the lid open.  The sizes of each piece in inches: top/bottom 6.5 x 10, sides 6.5 x 4, front/back 10 x 4, flap 10 by 2 and then corners were curved.  If you wanted a solid color for inside and same or another fabric for outside, you could just use those dimensions to cut a pattern.  I would suggest cutting the pelton as individual pieces and then zigzagging them together so they bend, or you can get the pelton to fold if you iron it, too.

To assemble, I used a pretty variegated red thread and zigzagged the pieces together.  Front, bottom, back, top and flap together first, then added sides.  It was a bit tricky getting corners sewn, but that open toe foot came in handy so I could see what was going on, and I was able to get within an inch on each of them.  Will whip stitch the bottoms of the corners before sending.

Am very pleased with the results of the letters and the box.  I made an open bag to use here and you can see it with some of the yet-to-be-trimmed letters needing to be done when my thumb doesn't have the blister! The fabrics are vibrant and my colors, but don't like it nearly as well as girlie girl's!  May just have to make me one like hers in more my colors. 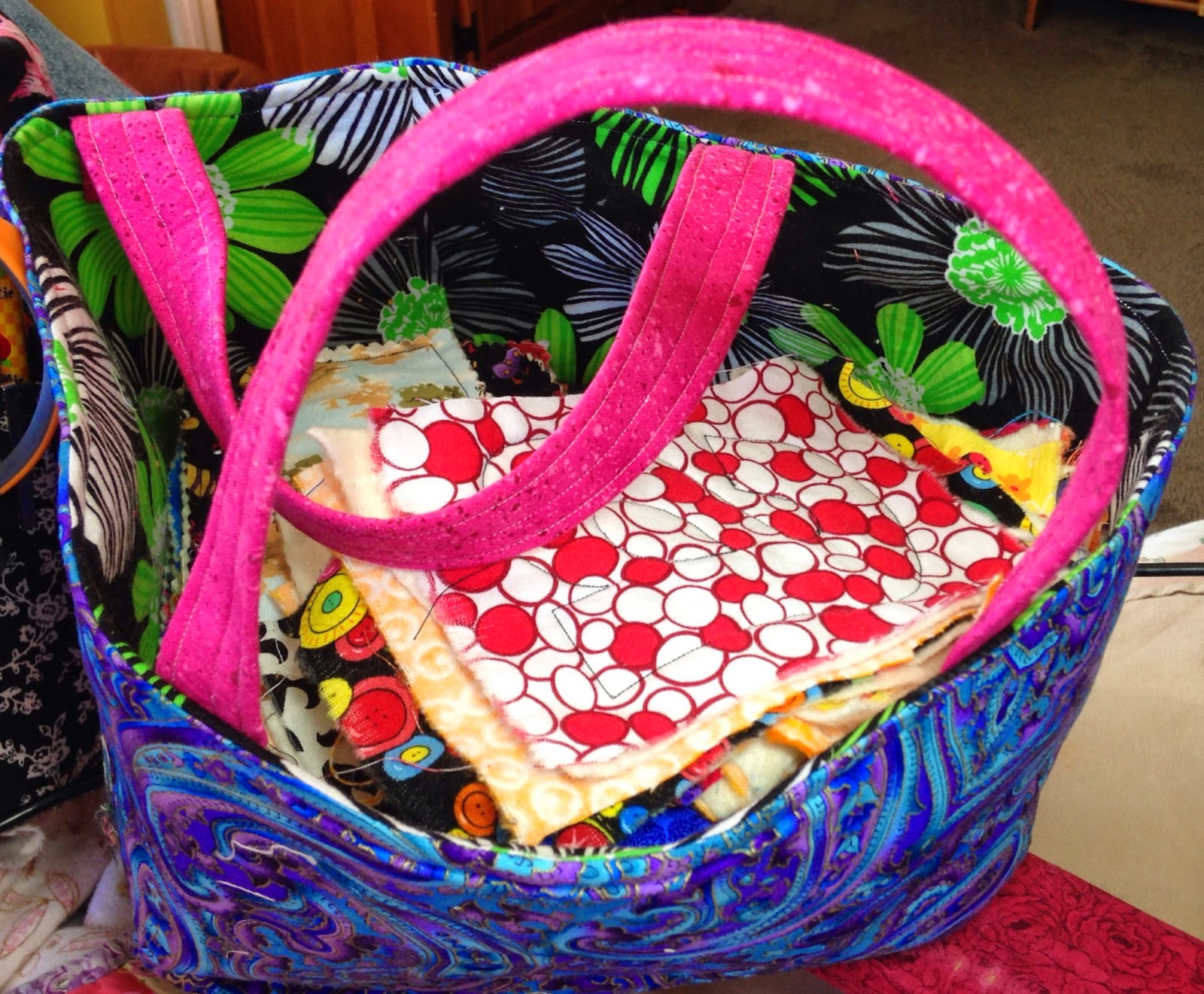 Thanks again to Jessica at: http://www.happytogetherbyjess.com/2009/07/rag-quilt-letters-tutorial.html  Have fun and try them yourself.  They went together a lot faster than expected, but I've been sewing for almost 60 years, and do a lot of applique by hand and machine.  Can quilt pieces if want on lettters and
Posted by Eileen at 3:47 PM 8 comments: 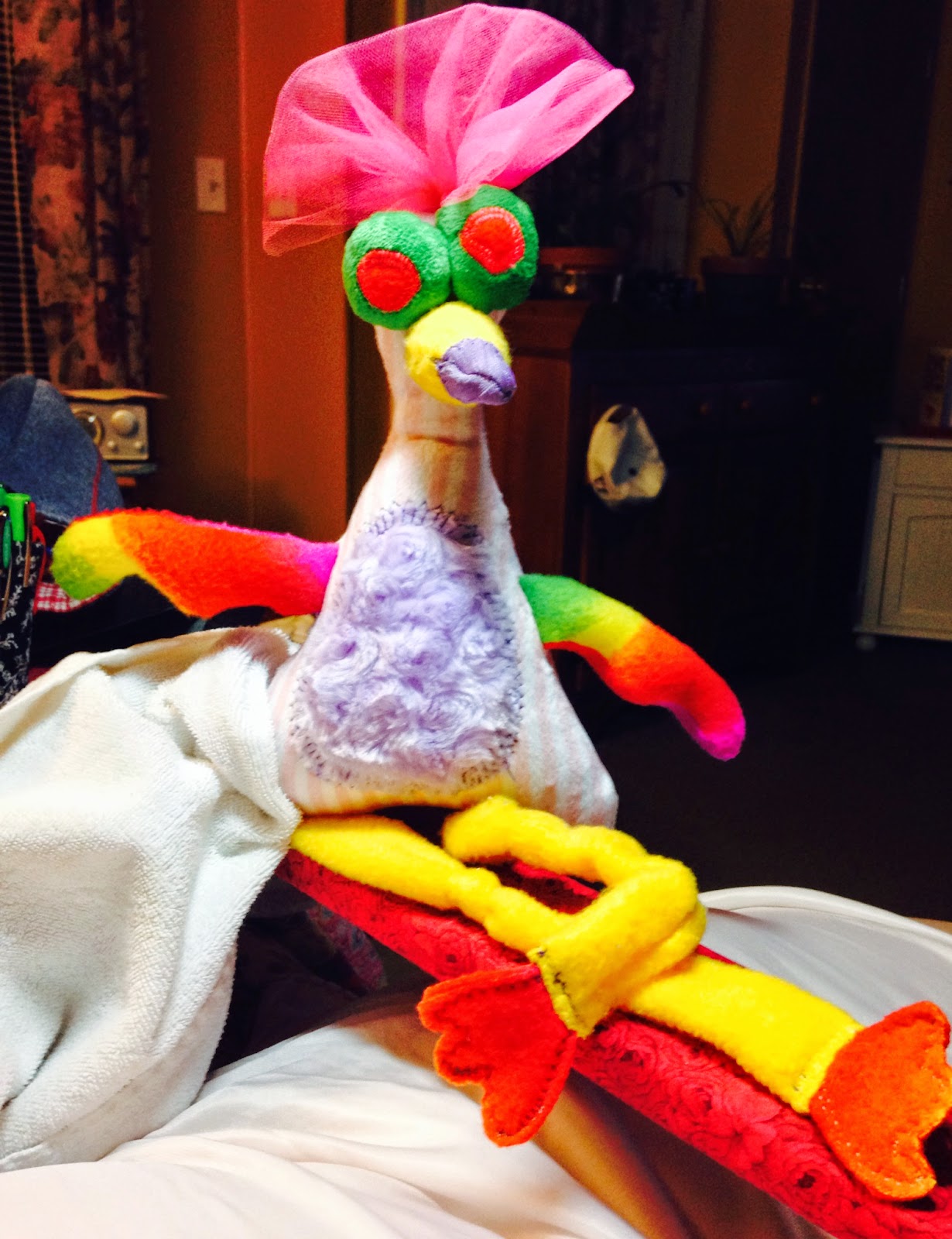 Years ago I made silly monster dollies for all my family.  Some were made using patterns or ideas from a book with lots of dolls and ideas for designing your own.  Since hubby and I have this thing about flamingos, his, of course, had to be a flamingo.  My sonny and his wife had given me the book for Christmas one year and while we were all together, everyone got to choose what monster they'd like.  Hubby and a couple others never chose, so I got to play around a lot.

He'd told me years and years ago that he hated those plastic flamingos people put in their yards--especially those living in the north.  He said he'd know "it was over between us" if he ever came home and found one.  That was too much of a dare for me to let go, so from then on I started finding or making flamingos to give him on Valentine's, his birthday, our anniversary or Christmas.  I've had lots of fun doing it and you can see several of the ones I've made, he sometimes buys me,  even family and friends have given us, or a few inspirational ideas found on pinterest here:   http://www.pinterest.com/ladybuglovelies/flamingo-fancies/

Anyway...enjoy the fluffy flying finery!
Posted by Eileen at 1:12 AM 2 comments:

These are two of my favorite and relatively recent undertakings.  Nothing is very recent due to a bad knee that has limited sewing time.  My Runners from Disa Designs has a bunch of very cute patterns in it.  I made two of each of these.  One each for me and daisy one for my daughter, sunflower one for my daughter in law.  I used steam a seam (my favorite) for these.  Hard to see borders but wanted dark to really set the design off.  Lots of fun quilting something small--so much easier on the shoulders!

These are strips for my eldest granddaughter's quilt.  She loves reds and blacks, so when I wanted to try a Sylvia's Bridal Sampler Quilt, it seemed a good color choice.  I loved making all of the blocks in the book and even added a few others I made up or found online.  Took me a long time, and it's taking a longer time to get it together! A few strips are now sewn together--it's going particularly slow since hurting my knee in a fall a few months ago.  She picked out a bunch she wanted and her little sister picked out some she wanted--after she had gone through EVERY SINGLE ONE and made comments.  This from my little girlie girl who is totally color blind and sees only in black/white/gray!!
Made this wonderful bread the other day...banana, orange, cranberry, pecan, oatmeal bread.  Absolutely delicious.  One thing I do to make yummy citrusy breads/cakes/cookies is to quarter the fruit, get seeds out then pulverize the whole thing in my Cuisinart.  Gives phenomenal flavor.  Basically used a banana bread recipe and added a cup each of cranberries and pecans that I ran through the food processor, too.  Used a cup of oatmeal to replace one of flour.  Used about half cup of yogurt and half cup of butter, instead of all butter.  It didn't rise much.  Also, stuck badly to bottom, but such great flavor.  A 2 oz. slice is about 160 calories...used myfitnesspal.com to figure that out.  A great site if you're wanting to lose weight and need a way to track what you eat.  My daughter in law uses an iphone app for it.
Posted by Eileen at 6:34 AM 3 comments:

Years ago, while living in Frankfurt, Germany, I designed this wallhanging to represent our family.
Posted by Eileen at 7:27 PM 6 comments:

Amy, at http://amyscreativeside.com/bloggers-quilt-festival/ is hosting her spring blogger's quilt festival again.   As usual, it will be wonderful and she'll have put in countless hours providing us with untold pleasure as we peruse all the entries.  This is the flamingo pillow made for hubby last Christmas.  Years and years ago, I'd told him I thought those plastic yard flamingos were fun.  He said, "I'll know we're over if I ever come home and find one of those in the front yard!"  Well...never one to forego a challenge, from then on I've found ways to give him flamingos.  And after awhile he and our family have gotten in on the fun, too.  We have flamingo puppets that amuse the grandkiddos, a little rug, Christmas ornaments, a monster-sized flamingo pen, etc.

Not sure where the pattern came from for these batik cuties...thought it was Bernina, but can't seem to find it anywhere.  Just a basic bunny pattern with floppy sort of feet.  The carrots were from a video--which I can't seem to locate, either, but it's just basically a triangular/wedge shape sewn along one side to make a cone for carrot.  Mine are about hands' length when sewn.  Turn under about 1/4" and sew a gathering stitch with doubled thread.  Catch leaf  as you sew (two mountain shaped pieces about 2x3 sewn right sides together).  Used forceps to stuff ears, and ends of carrots, then stuffed by hand.  For bunnies I knew were going to children, double sewed the bottoms after stuffing.  Bunnies couldn't have been easier--just sew 1/4" seam all around.  Their feet were definitely floppy as I couldn't seem to get them filled, but figure bunnies have floppy feet anyway!!!!  Very easy to make--made 22 bunnies and 8 carrots for grandkiddos, hubby and some other kiddos.

Last month or so, I've not been able to sew on my machine because of a sore shoulder.  Could do some applique so worked on a Rose of Sharon block quite a lot and did a couple other things as long as kept arms close to my body.  The other day I got brave enough to try some free motion quilting on a pretty table runner that had been sandwiched for quite some time.  It's made using extra blocks from Clover and Violet's Garden Steps quilt-along:   http://www.cloverandviolet.com/garden-steps   Absolutely love the colors and got rather addicted to doing their embroidered centers and making up several of my own.